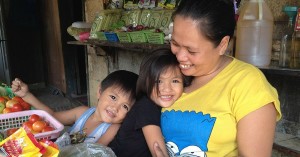 Marites with two of her kids.

“Life was a constant misery”. This is how a financially challenged mother, Marites Desierto would describe her life before.

Marites, 35 years old, a plain housewife and married to a construction worker, whose earning P 200.00 per day with five kids around waiting to be fed decently, and a tiny house with uncountable holes on the roof that provides the family a free shower whenever it rains, thought life could get any worst.

She was fully dependent with her husband’s earning which she expressed isn’t enough to cater her family’s needs, especially to her kids. Providing a meal has become an everyday struggle for them, it even get worst when her husband got laid off from his job and took him 6 months to find another one.

“Whenever my kids tell me that they are hungry, and I have nothing to give them but tears & shame, I felt like I failed as a mother”, she said.

In order to survive, she would find scraps around their house and around the neighborhood and sell them -from broken chairs to unusable wires, anything that can be sold to a junk shop. From that money, she would buy something for the meal of her kids – a meal that doesn’t fill the hunger.

Just like any loving mother, Marites wanted to do everything for her children and their situation, but she hasn’t been given the opportunity to do so. She thought she was meant to be dependent on her husband alone. But she never knew that an overturn will happen.

Year 2014, not fully understanding about what she signed up to, she became an official member of Matab-ang Livelihood Project Association Inc. or simply say MALIPAI.

Marites became one of the recipients of the Enterprise Development program of MALIPAI offered to its members, giving assistance in starting up a business. On her first loan, she started buying & selling dried fish around the neighborhood letting her earn quite an income that has been a big help in catering her family’s needs according to her.  But just like any other businesses, she met highs and lows too.

And just right in time, the association organized an Entrepreneurship Seminar for the members, especially for the recipients of the Enterprise Development. Marites was one of the participants and according to her, she learned that in doing business you have to take chances as much as you can.

Her small business is continually meeting highs & lows, however she is determined to survived all the lows and cherished the highs.

From struggling to eat a meal three times a day, she can now spoil her kids with food. From a hand-me-down school uniforms & materials, she can now provide all necessary school needs of her kids. And for almost two years of doing business, she was able to buy their first ever couch for their living room, a DVD player to which they enjoy whenever they watch movies, a washing machine that has given her much convenience and a refrigerator that has given them cold drinks to enjoy especially during the hot & humid weather & a big help to her frozen foods business. But more than these, the one thing she’s excited about is her recent project – the roof repair of her house to which she shared was the first time to be repaired since 2000.

“Everything that happened since I became part of the MALIPAI family was truly life changing, not just for me, but also for my kids. And more than the financial development, it is the joy that I felt when I realized that from a struggling-dependent woman, I became an independent-businessmum. It was liberating and now I could say , life could get any better.”, Marites highly noted.

Asked what she could advice to her fellow members, she pointed out that in doing business, you should always be dedicated, yet never comprise your time with your family. Things has become bearable and easy for her because of her inspiration – her kids. She also added that one should never take advantage of other people’s misfortune, rather use it as an opportunity to help. She’s taking steps away from poverty because of the people who never hesitated to help her and she wanted to be that person to others as well. And lastly, she said that if you want a financial assurance, savings should always be a priority. It’s necessary for her to save and she expressed that she also hope that it will be necessary to others as well.

Marites is one of the active & outstanding members of MALIPAI and she is currently on her fifth loan.