Our Response to Hunger

Hunger is relevant to the cases of malnutrition in the country particularly among children.

According to a survey conducted by the Social Weather Stations (SWS) in the second quarter of 2018, 2.2 million Filipino families experienced hunger.

But in June 2018, President Rodrigo Duterte signed into law, Republic Act No. 11037, which established a national feeding program for undernourished children in the Philippines.

“Hunger strikes to the very core of our humanity. Children, most especially, will find it hard to understand why they do not have food to eat because the reality is they have a right to nutritious food,” Senator Grace Poe, one of authors of the said bill, stated in an interview.

And to somehow lessen the occurrence of hunger specifically in the city of Bacolod, the Feeding Program of MALIPAI has been organized. 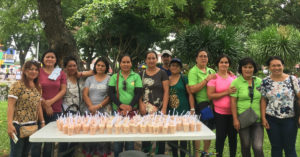 Every second Saturday of the month, the street feed takes place.

It is facilitated by the staff and members of MALIPAI as well as the parents of the scholars.

Many people living near the plaza flock in the area where the street kids tutorial is conducted to avail free feeding from MALIPAI. 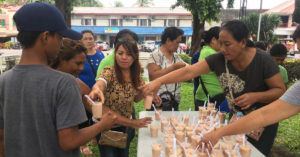 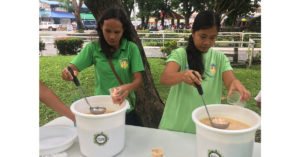 Sharon Toledo, a mother of five kids (four of them attend the tutorial) said, “Daku gid nga bulig ang feeding labi na gid sa mga pumuluyo sa plaza nga kung kis-a wala kalan-on.” (The feeding is a big help especially for the people living in the plaza who have nothing to eat.)

Proper nutrition is vital to have a healthy and sickness-free body.

Although we can’t avoid to get sick but we can somehow prevent chronic diseases that may hit us if we take nutritious foods.